Home » Not Speaking for Em

This is Cam and his sister Emlyn. The two share a special bond as you can see. This October Cam chose to join our Not Speaking campaign. We have asked people to take an hour, he took a week. There is a lot to learn from a week in silence for somebody that you love deeply. Here are Cam’s insights from the process. 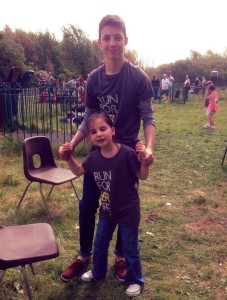 Q – What was the hardest part?

A – The frustration when people don’t understand what you’re trying to say and you feel a bit pissed off because you can’t elaborate…and that’s me only having the very basic forms of communication. Again it made me feel so bad that Em doesn’t even have that.

Q – What did ‘Not Speaking’ teach you about Rett syndrome that you didn’t already know?

A – This is a very generic answer but it’s the most honest. It helped me scratch the surface of what life feels like for her. The loneliness of not having your thoughts understood. The isolation sitting quietly in a room full of talking people, the way those people listen to and gel with each other…you’re on the outside when you can’t join in. When you want to say something witty, you need to use a lot of words so even with the communication (writing, signing, gesturing) I had I couldn’t really be myself. I felt like I was forced to be someone I’m not. Not funny or a smart ass, just quiet and taking things in.

Q – What was the most surprising thing about not speaking?

A – It wasn’t as hard as I thought it would be, but thats because I had other methods of communicating and it made me feel a bit guilty doing that because I know Emlyn can’t other than using her eyes and trusting us to know what she wants. like what if we’re not looking or paying attention or if we don’t get it?

Q – Was there anything positive you learnt about Rett

A – Not talking means you do a LOT of listening. You learn things about people that you wouldn’t if you were talking. You’re not the centre of attention so you see WAY more than you do when you can talk. 2 of my mates were having an argument about football (nothing serious) and and they were both wrong, and I knew they were (not talking right then was VERY frustrating) but a third friend was quietly saying the right answer and no one was listening to him…I heard him but no one else did. It also gave me a perspective on who the alpha personalities were and who was more reserved, that was a view that I didn’t have before this (as I’m one of the more alpha types usually). So I guess I found out that Emmy must be seeing and hearing stuff and I really wonder what she’s thinking more than ever.

Q – Was there anything really unusual that you discovered

A – There was this really weird feeling in my throat like my vocal chords were sticky and clearing my throat didn’t shift that feeling at all. My mom & dad thought that was really interesting (when I told them once I could talk) and wondered if that was why Emmy used to scream all the time. The feeling went away once I could talk again. But it was a constant irritation when I couldn’t.

Q – Do you think other people should try not speaking and if so, why?

A – I think as many people should do as can. It’s difficult but achievable. Doing it to raise money is a tangible thing thats related to Rett but it’s also something anyone can do unlike running marathons or climbing mountains. I’d also say doing it will give you a sense of pride that you accomplished it and relief when it’s finished…all that and a deeper perspective on Rett which is ultimately the best thing to come out of it.

Q – do you have any tips for other considering it?

A – get a white board, a small one so you can carry it around. Every time you get frustrated just remember why you’re doing it, that will sort you out quick. Prepare some cards in advance with simple answers on them.

It was hard the first day, and it got progressively easier as the days went along until the last 2 days when it started getting harder again, the last day was really really hard.

I had a LOT of support and encouragement while I was doing it which was great. People sent me really kind messages and said nice things that helped push me through the last couple of days. My mom was a pain in the ass with getting the pictures every day but I could see why she was doing it because I had the chance to share what I was doing with other people.

A – If it’s okay I’d like to say thank you to Rettland (Colleen & Erica), Rettsyndrome.org, curerett.org, Cammy Can and her parents and everyone who donated here and online. I really appreciate it.